Mother Turkey and her chicks

Mother Turkey and her chicks is a bedtime story about a wise turkey who protected her chicks from a sly fox. let’s read on.

Mother Turkey believed in the old adage taught to her by her grandmother, “The early bird catches the worm.”

Every evening after sunset, Mrs. Turkey would take her little chicks to a high branch of an old apple-tree. She would sang them to sleep with this lullaby: 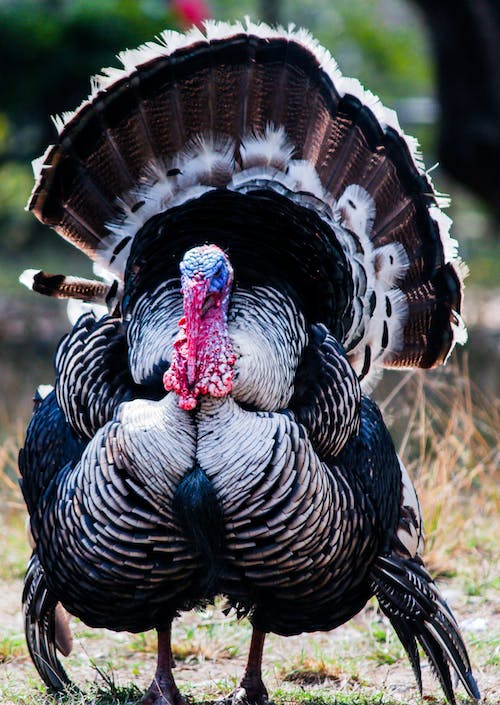 Mother Turkey told her chicks about the sly fox

Mother Turkey had told her chicks about the sly fox that lived in a hole on the other side of the hill. All she had to do was to mention that name to make them obey.

As his mother came to the end of the verse, one chick said, “I won’t recognize him if I met him.”

“Oh yes, you would,” replied his mother. “He has a very long tail and a sharp nose. His teeth are pointed and long!

“Oh, dear me!” she exclaimed, as she flapped her wings at the thought of Mr. Fox’s teeth!

“I do wish we could get just a look at him,” said another chick.

“Will you wake us if he comes tonight?” asked another chick.

“I won’t need to do that,” replied Mother Turkey; “you will hear us talking. He is a very sly fellow.”

She began to sing:

By the time Mother Turkey reached the end of the verse all the chicks were fast asleep.

The sly fox came to the apple tree during the night

Mother Turkey stretched out her wings once or twice and turned her head in all directions. She settled herself for a nap.

The moon was shining brightly when she awoke. She saw what looked like a large black dog walking cautiously toward the tree. Mother Turkey took another look and saw the bushy tail. She perched herself more firmly on the limb and looked to see if her children were safe on there, too.

She knew that the sly fox had come to take one of her chicks back to his hole if he could.

“Good evening, Mr. Fox,” she said, as the fox came near to the tree. “I was sure that I recognized your splendid figure. You certainly make a most remarkable picture in the moonlight.”

Mr. Fox was somewhat taken aback at this pleasant compliment. He was usually the one to make remarks while the turkeys listened, not daring to move or speak.

“You are most flattering, Mistress Turkey,” he replied, “I can only return the compliment by telling you that you are a picture yourself in the moonlight. You look so stately as you sit on that limb.”

Mr. Fox offered to care for the chicks while Mistress Turkey took a walk

Mr. Fox continued to speak and said, “I believe that you would truly enjoy this beautiful evening if you come down from the tree and take a walk over the hill.”

“No doubt you are right,” replied Mrs. Turkey, “but I could not think of leaving my children alone.”

“I will be very glad to take care of the little dears while you are gone,” said Mr. Fox, “if you allow them to come down beside me I will tell them an interesting story until you return.”

By this time the turkey chicks were awake and listening to what the fox was saying. He seemed so nice and polite that they quite forgot to be afraid.

When he spoke about telling them a story, one of them said, “Oh, please do go, mother, and let him tell us a story. We’ll be very good if you will.”

“You see, my dear madam,” said the fox, “the little dears are quite willing to stay with me. Do go and enjoy the moonlight.”

Mother Turkey looked at her children in a manner that plainly said, “Be quiet.”

She said to Mr. Fox:

“I appreciate your kind offer. However, my children are not well and I cannot leave them. They have been sick and are thin. I have to be very careful that they sleep and eat well. If they do not, they will not be fat by next Thanksgiving. That would be a disgrace, you know.”

When the fox heard this he was not so anxious to have the chicks come down. He replied:

“I know just how anxious you must feel, Mistress Turkey. If you come down here I will tell you what to do to make them fat.”

“If he cannot get the chicks he will take me,” said Mrs. Turkey to herself, “but I am too old a bird to be caught even by this sly fellow.” 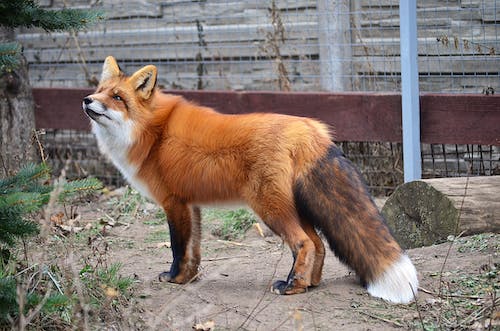 Mrs. Turkey did not reply to this last remark. She was thinking about a trap she had seen her master set the day before.

“I wish you would walk around a little so my children can see what a beautiful bushy tail you have,” she said. “They have never seen so handsome a fellow as you are.”

Mr. Fox was very proud of his tail, so he walked out from the shade of the tree and strutted about.

“Tell him how handsome he is,” whispered Mother Turkey to her chicks.

“Oh, isn’t he handsome!” said one of the chicks.

Another chick chimed in, “I wish we had such bushy tails, instead of these straight feathers.”

Mrs. Turkey said, “You are absolutely the most handsome creature I have ever seen, and I have seen many in my time.”

By this time the fox was so pleased with their admiration that he was ready to do anything to display his charms.

Mrs. Turkey egged him on when she said, “I wish you would how thems how you can run and jump.”

Mr. Fox was so pleased with all of the compliments that he jump around to show the turkey chicks how nimble he was.

“The top of that barrel would be a good place to jump around,” said Mrs. Turkey. However, she knew that the barrel did not have a cover. She also knew that it was nearly full of water.

Mr. Fox leaped unto the barrel and fell into the water with a loud splash. He tried to get out, but it was no use. The barrel was very deep.

The farmer, hearing the noise, came out and soon put an end to Mr. Fox.

Mrs. Turkey sang her chicks to sleep once again

The little turkeys sat wide-awake and trembling beside their mother. When the farmer went into the house she began to sing:

And in a few minutes all was quiet again in the yard. 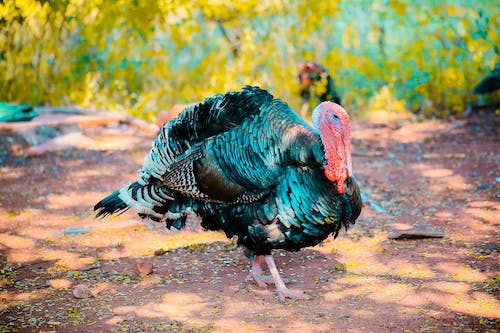 Read more short stories for children at this link.